I had a wonderful time with my neighbors on our fourth of July celebration, held this past Sunday on the 4th. Everyone in our immediate area usually brings a dish to share or a meat to cook on the grill and the adults bring their beverage of choice, from iced tea to cocktails. I think everyone had a good time, I sure did. One of the guys brought his propane tank and stand and we did a country boil consisting of Old Bay seasoning, shrimp, corn on the cob, baby red potatoes, and country red sausage. It was a hit.

My dishes were Baked Beans, which I prepped outside and cooked on the grill. I did absolutely everything outside on my patio table near my grills and smokers. With a trash can and liner beside me and sanitary gloves, clean up was a breeze. I also had 3 racks of ribs to smoke, but I'll write about doing those tomorrow. Be sure to check back, they were awesome and the compliments from neighbors was continuous. I am proud of how they turned out and will share with my readers tomorrow. Let's get to those beans shall we? 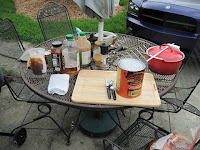 I brought all of my ingredients outside to the patio and prepared to make the beans. As you can see from the photo, we are going to doctor up a huge can of Bush Beans. I had the following ingredients on hand:

I started a chimney starter of charcoal and while that was heating up, I diced up my onions. I had placed bacon in the garage freezer for about 20 minutes to firm it up before dicing it. That makes handling it so much easier. Toss the onions and bacon into a 6 quart dutch oven. Mine is enameled cast iron that was given to me last Christmas. What a wonderful gift!! 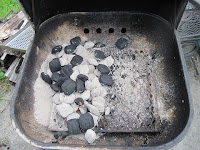 When the charcoal was ready, I dumped it onto only one side of the grill. The idea was to use the hot side to saute the onions, garlic and bacon and then slowly simmer and smoke the beans on the indirect heat side. I also had two rubbed spare rib tips that I wanted to slowly smoke and dice to add to the beans later. 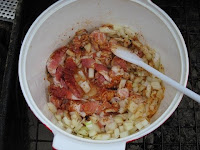 Once I had the grill set up for high indirect heat, I placed the dutch oven directly over the coals and began to stir the onions, garlic and bacon. I added about 1/4 cup of apple cider vinegar to kick up the flavor and add some moisture to the pot. Once the bacon had began to brown, I added the can of roasted tomatoes. I wanted to use the high heat to help break them down somewhat. Once the mixture looked like it was breaking down and mixing together well, I removed the dutch oven from the heat and added the can of beans, the pimientos, a generous dash of brown sugar, about 1 cup BBQ sauce, and a few dashes of my favorite BBQ rub. I kept some apple juice nearby in case the beans needed moisture later. 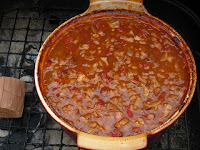 Return the dutch oven to the grill and place partially over the coals. You'll be leaving the top off the entire time to allow smoke into the pot. sprinkle some hickory chips over your hot coals and close the lid and allow to smoke for about 30 minutes. When the smoke begins to subside, open the grill and rotate the pot so that the cooler side is now over the coals. Stir the mixture extremely well. It should be very hot and easy to stir. Add some more wood chips and smoke for about an hour.

At this point the beans are technically "cooked", but I like to kick it up a few and smoke it for a few hours. I added a few coals, some big chunks of hickory and placed the pot on the side of the grill with no coals. From here on out, I will not stir the beans. I want them to simmer and bring liquids to top which will then caramelize when the sugars bake in. The smoke will also add a nice dark rich color to the beans that I want to be there when I present the dish. I prefer to think of it as art.

The beans came out great. I did add smoked rib tips, which is kinda optional. Not everyone wants meat in their beans. If that is the case, either make a small crock on the side with no meat, or eliminate the meat entirely. These beans can be easily spiced up if you like, simply add more rub, some cayenne pepper and cracked pepper. Heck, add cracked pepper anyways, I did and forgot to mention it above.

The great thing about doing this all outdoors was my kitchen was only used to wash dishes I dirtied. Other than that, it was clean and ready for some other use, like prepping ribs. Tune in tomorrow for more on that.