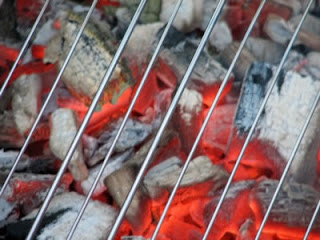 oday I was going through some old things and I found a 16MB memory card that I had taken out of my camera some time ago. When i went to see what was on it, I was surprised to find shots of a cook out that I did at least a year ago on my old Aussie grill. Apparently, I had been thinking about blogging about BBQ for some time before actually sitting down and just doing it.  I'm proud to present to you, a cook out I did in the summer of 2008. 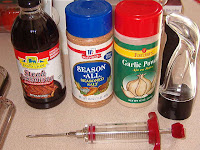 The menu called for grilled London Broil and grilled baby red potatoes. Steak and potatoes, the two ingredients on a man's food pyramid. London broil is similar to a marinated flank steak, only a bit cheaper. It is best served at medium rare and sliced in thin angular cuts against the grain. With a good medium-high heat charcoal fire, it should take about 7-9 minutes per side. 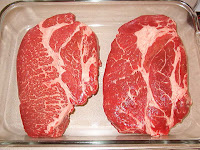 I wanted to inject and rub the meat while the charcoal was coming to life in it's charcoal starter kettle. I wanted to keep this simple, as it was summer and hot out. I injected the meat with a standard beef marinade, store brand as you can see in the picture. I used a standard seasoned salt, garlic powder and cracked black pepper for the rub. I sprinkled liberally and rubbed into both sides of the meat. 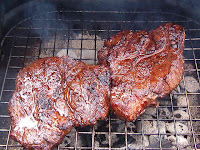 I prepared the grill, poured the hot coals and wiped the grill rack with olive oil. At this time, the grill is very hot, the coals have barely ashed over and we are going to sear the meat and set up some grill marks. Since the coal will cool some by the time we flip the meat over, the presentation grill marks are the first ones you'll make so be careful. 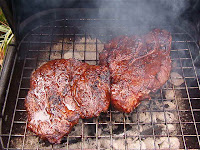 I do it like this. Place both pieces of meat on the grill racks at an angle. Let the meat sit for about 4-5 minutes and gently lift with tongs from one end and see if the meat lifts. Once the meat easily separates from the grill racks, we are going to turn it by 4 hours. What i mean by that is look at how the meat runs along the straight grill racks. Pretend one end is the hour hand on a clock and rotate the meat without flipping to a position about 4 hours from the first sear. I let it cook an additional 4-5 minutes before flipping the meat and repeating the process again. 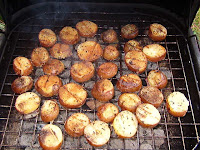 I used a digital thermometer to make sure that the temp of my meat did not exceed 120. I removed it from the grill and let it sit while I cooked the potatoes. these are simple. Just par boil some baby reds and leave the skins on. Slice the potatoes about 1/2" thick and brush with olive oil and sprinkle with seasoned salt, parsley or basil and Parmesan cheese. Once you make these, your family won't let you fix potatoes any other way. Just brown on the grill and serve.

As you can see, not a lot of prep time involved in this meal. I kept it simple and fun. Stick around this week as the holidays approach, I'll be kicking it into a higher gear with holiday meal ideas from the grill. We are going to grill some pineapple, mango and mojo Pork Tenderloin! We'll also be making a tropical fruit chutney, caramelized sweet potatoes and bacon spears, all on the grill. The presentation and colors will be fantastic, so please make sure to check back for that on Sunday.

As always, until next time - Keep Smokin!!

Mu hubby would so love this dinner, Ill have to show him , it looks fantastic!!

Now that's what I'm talking about! Looks awesome. Man, I wish I could have a grill.

all looks great... I love grilling a london broil, so easy

and takes a marinade great