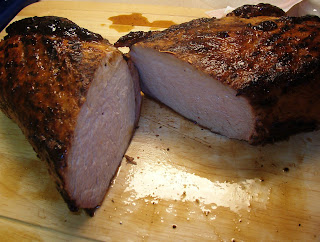 I have been looking forward to today for a few days. There had been a couple of forum threads regarding pork tenderloins and various ways to smoke or grill them over at the SMF and that got me wanting to grill some pork. With the holidays coming up, I already had ideas about plating that included using fruit. I thought, "what goes better with pork then pineapple and mango? And besides, pineapple was a couple of dollars off on sale at my local Food Lion. 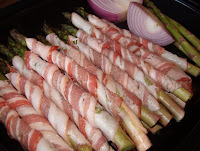 I prepared several side dishes to go with today's meal and I'll keep those brief and cover them in more depth later this upcoming week right here on the blog. The menu was cooked on two grills that I had running simultaneously. Next time they will be within one step of each other. 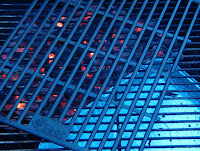 To start with the pork, I trimmed excess fat and placed the large loin in a 2 gallon zip loc bag. I added a large bottle of Mojo which is an orange based marinade that is popular with Cuban and Mexican pork recipes. It has a nice ambiance about it. You can find a recipe online for Mojo or visit your Mexican or ethnic aisle in the grocery story. I allowed the pork to marinate for 6 hours. 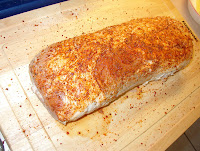 I got the Cowboy's Lump Charcoal started in my Weber charcoal chimney and pulled the loin out of the fridge, then rinsed and patted it dry. I rubbed it very lightly with a BBQ rub from the McCormick Grillmates line. My plan was to sear the pork on a hot sear grate and then bring the internal temp up to 140 degrees using an indirect grilling method. I basically seared on one side, and then moved to the cool side of the grill and placed the top on, with the vent over the meat. This directs the heat to be drawn across the meat before it exits through the vents. 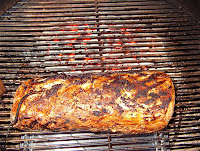 My dual probe remote thermometer indicated that for the hour it took to bring the temp to 140 degrees F, the Weber air temp was 325 degrees. I also used a couple of soaked hickory chunks for flavor and had a nice smoke. I had made a quick and simple pineapple juice glaze and kept the meat mopped with the glaze. When the internal temperature reached 142 degrees F, I removed from the Weber and wrapped in heavy duty foil and allowed to sit for 20 minutes. If desired, reserve liquid in foil to drizzle over meat. 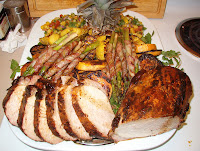 Here is the final presentation. I used the pineapple crown for decoration. In the back of the platter is a pineapple and mango chutney that goes great with pork or fish. I'll write about making it later this week. Also on the platter is grilled pineapple, caramelized sweet potatoes and asparagus spears wrapped in bacon. 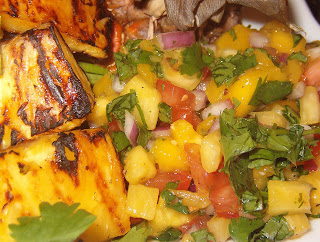 Closeup of pineapple and mango salsa

How can you put up a copyright statement protecting photos when you are using pictures from other websites? Example...the candy canes, the rubbed ribs. You might want to obey your own rules.

Hi Ron P. If i had to guess, 99% of my photos are mine. Good eye on the candy canes, if you search the web for images of candy canes, that pic is everywhere. As for rubbed ribs, that's my picture, thanks for the compliment.

My site content rights stand. Perhaps I'll watermark my pics. thanks for your input.