On Halloween Day, I decided I wanted to cook something on the Weber. It was a toss up between apple dumplings and Baby Back Ribs. The ribs won. I already had them in the fridge and in my mind, they required the least amount of work. 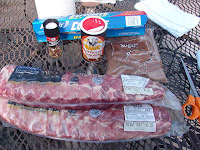 I started with 2 racks, both approx 2.5 lbs. In butcher lingo, that is 2 and a half down. I opened up the packages and placed them on wax paper. By this time, my charcoal chimney had been started and was nearing dumping time. I had a foil pan on the charcoal grate to catch drippings and the charcoal was going to be banked on the opposite side.

Back to the ribs. I sprinkled them liberally with Magic BBQ Seasoning that is available at Food Lion. It's a great rub and I highly recommend it. Then I cracked a 5 pepper blend over the rub. I did not rub the rub into the meat. Today I was following advice from a competition team that I've been reading about. 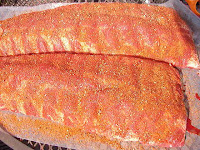 I then opened a bag of dark brown sugar and generously packed it down on top of the Rub and pepper. After about 10 minutes, the brown sugar began to melt and it locked in the rub. At this point, I sprinkled some rub on again and cracked pepper. It seems redundant, but it does make for a very nice presentation that you'll see in a moment. 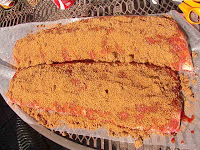 When the charcoal was ready, I poured it onto one side of the grill and let it ash over. When it was ready, I sprinkled some hickory chips that had been soaking over the top of the coals to produce the smoke. I transferred the ribs to the grill, over the drip pan and closed the lid. 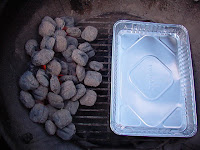 It was at this point that everything went wrong. I pulled out my Maverick ET-73 remote temp probe and inserted the probe and wire and turned on the transceiver. When I went to turn on the remote receiver, it would not turn on. The ON/OFF switch would not stay in the On position. I messed with it for about 3 minutes, still not knowing what kind of temp I had going on in the kettle grill. Looking at the picture here, I would have used about half of that charcoal now.

I hopped in my truck and made an emergency run to K-mart, only to find that all their grilling stuff is mostly gone, moved to the back room on October 1st to make room for Santa's Toy land. Now I have no problem with Christmas stuff coming out early, but if it means I can't buy grill accessories, charcoal, wood or a replacement thermo, then Santa is pissing me off. This is Florida I keep thinking to myself. We grill and smoke meat year round.

Note to self, find a good BBQ retailer and quit using superstores that haul out seasonal stuff 3 months in advance. Need a Valentines box of chocolates, no worries, they'll be on display day after Christmas. Halloween candy? Look for it the day after Labor Day. 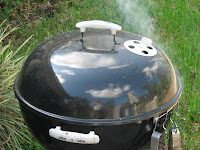 By the time I got back and held my hand over the exhaust vent, I decided the fire was too hot. I nearly completely closed the bottom tri-vent in my Weber and lifted the lid. In the first hour of smoking, the brown sugar had already caramelized and was darkening even more. I decided to let fire die down slowly, and was able to hold my hand over the top vent for 5 seconds or more. I would let this continue until the first two hours were up.

After two hours, I decided to foil the ribs to ensure moisture. I was sure I overcooked them when my thermometer broke down. In fact, the only reason I'm blogging about these less then perfect ribs is to let my readers know, that things can and will go wrong. I foiled the ribs and sprayed apple juice into the foil packets and sealed them. Apple juice normally works great as a moisturizer when you have a slow cooking fire. 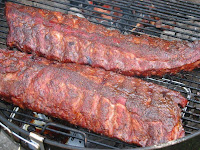 I on  the other hand, had a hotter fire then I realized. The apple juice caramelized and burnt, sealing the foil ends. I had to rip them open only to discover that the sugar from the rub and the apple juice had left burnt spots on the ribs. What started out as a treat to a few of my neighbors, ended up on my cutting board and free to anyone that wanted them.

I will not attempt to slow cook on the Weber again until I can either replace the thermo or get my current one fixed. Funds are tight, so who knows when that will happen again. I can't keep an eye on any temps now. That's not good when temp control is so important in turning out good food outdoors. 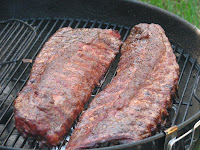 In the next couple of weeks, I'll be discussing techniques and tips. I hope to be up and cooking again soon. It sucks when fairly new equipment breaks down. It sucks harder when it is the only one you had.