What a beautiful day today was. It was sunny, in the upper 70's by mid noon. I decided to take care of some yard work before smoking the fatties. Last week we had a few days of very cool weather and it was our hint that winter was on the way. I wanted to get the hedges trimmed, palm beds cleaned up and apply the last fertilizer of the year to our lawn. The whole time I was thinking about weaving bacon... 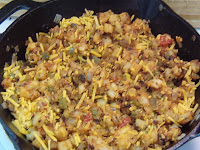 The previous night, I prepared the filling in a hot cast iron skillet. Diced Potatoes, onions, green peppers garlic, salsa and cheddar cheese. I added the salsa and cheese when the mixture was cool and then packed it in tight into 2 8" pieces of 2" PVC. I placed caps on the ends and then wrapped it in clear and set it in the fridge to harden.

Since this was my first time doing this recipe and technique, I bought what was on sale and used store brand items. For the most part it worked out OK, but next time I'll stick to a butcher for the sausage. The Johnsonville I purchased was in a tube on sale for $1.99. Not a flavourful sausage and it was grayish. I'd rather have fresh sausage that has a bit more color to it. 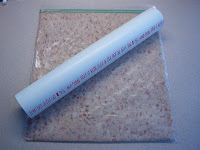 I took a one gallon zip loc bag and placed the sausage into the bag. The next part took a bit of practice, but I picked up on it quickly. I used a piece of the PVC to roll out the meat and the end result is pictured. Notice the bland looking color? 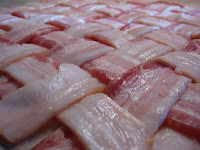 After those were tossed into the fridge, next up on the list of assembly is to weave the bacon. I used a sheet of wax paper for a neat, quick release. At this stage, here again using a cheaper brand of bacon, one of the packages had very skimpy pieces that were not suited for weaving. Luckily, I had bought an extra pound of bacon as a back up since I was new to this. One pound of thin cut bacon was just enough for one weaved square. 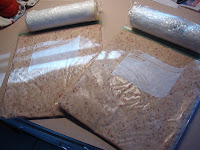 The next step was to roll the sausage and cover the stuffing. Because I had used 2" PVC and packed my filler tight, it was good and solid. I used a 1 3/4" piece with a cap to push the filling out from one of the open ends of PVC. This method worked so good in fact, that I forgot to take pictures. I literally had the filling on and the log rolled and ready for bacon in about a minute. Tip: Keep everything cold. The meat is easier to handle. 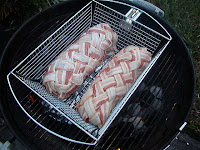 Here you can see two fatties side by side in the basket that we are going to smoke them in. Take a look at the bacon weaves. Can you tell which one I did first? I think the second one looks ten times better. These guys are ready for the smoker.

I cooked them on the Weber Gold using indirect heating . I am still new to smoking in the Weber but trying to master it. I used the Maverick Redi Check remote digital thermometer to monitor the temperature of the dome. I had the probe dropped down through the hood damper and let it hang down to about where the meat was. 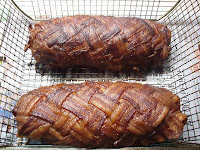 The temp for most of the cook was 350 degrees. It was hotter then I wanted and I was able to maintain 25-300 for awhile, but the Weber won most of the time. It was because of this that the fatties were done in about 2 hours as opposed to the desired 3 hour range. I was really impressed with how well the Weber is for indirect/convection cooking. The final product looked first class all the way and was very good.

I look forward to doing these again another time with some other filling. 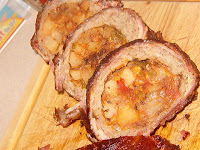 To view a bigger pic, simply click on the picture.

As always.... until next time, keep on smokin!

Email ThisBlogThis!Share to TwitterShare to FacebookShare to Pinterest
Labels: Smoking a Breakfast Fatty

Your first time? You look like a bacon weaving pro.

Winter/schminter, it snowed all day yesterday in Denver. It's just beautiful.