Today is the day to smoke butt. Lot's of it.  I purchased 30 lbs of butt roasts that were on sale at Food Lion. I went straight to the butcher and asked him to bring me 3 cryovac packs of butts. Each cryovac pack contains 2 butts and the total weight is approx 15 lbs per pack. I selected the two best looking cryovacs and had him price them with stickers and I was on my way.

When i got to the checkout, I received several remarks about my 30 lbs or pork. I heard "when will it be ready?", "Do you live nearby?" and "Are you cooking all of that for the game?". The last comment struck me as funny, as we host the annual Florida Gators and Georgia Bulldogs college football game here in Jacksonville. There are tailgate parties going on all week leading up to the game. RV city is nearly already full. 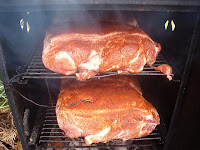 I got home and fired up the smoker and gave it time to come to 250 degrees. Meanwhile, I went inside and rinsed off the pork and proceeded to give it a good rub down with Magical Barbecue Mix, a store bought BBQ rub that I really like on pork. It's the best BBQ you'll ever buy from the store. If you can't locate it at your store, I have it for sale on under my sponsors list for only $3. When the smoker hit 300 degrees, I added the meat, all 30 pounds of it. This is what it looks like currently. I have my probes for the remote Maverick ET 7300 in place and I am ready to smoke.

I'll update the blog as time goes on to let you know where it is in cooking. I am guesstimating a smoke time of about 9 hours.

I am using a blend of hickory and mesquite wood. We have the Florida vs Georgia game this weekend and a neighborhood get together and Halloween. I do plan on freezing a few bags for pulled pork chili and grilled tamales. 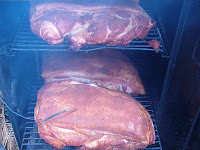 2.5 hours into smoke and my meat probe says 161 on biggest piece... I don't trust that. My maverick meat probe has always seemed to be off. Smoker temp at 215 with all vents wide open, getting close to time to add more fuel. I'll update with another pic with racks pulled out in a few....

The camera attempted to adjust the color in the pic because of the bluish smoke. Not the best camera, but it does the job. I usually take 2 or 3 shots and only upload the best one, but wanted to get that door shut asap after adding new fuel and wood.

Almost 6 hours into the cook, the meat temperature is 176 and the smoker is reading 200. It is time to add more charcoal. After adding charcoal and wood, we have used almost half of an 18 lb bag of Kingsford charcoal. If my guesstimate was right, we have about 3.5 hours left to bring the meat up another 15-20 degrees and then we'll pull them and wrap them for setting up.

7 hours into the smoke and the meat has plateaued at 176 degrees. The plateau is not a bad thing, it happens every smoke. It is the point where the meat believes it is done and can't absorb any more energy. But the meat is wrong and must be shown the proper way. We want to pull the pork, not slice it. If I wanted sliced pork, I would pull my smallest two pieces now and set them aside for carving. However the entire smoke is heading towards pulled pork, so we need a minimum of 190 degrees before pulling it from the smoker.

I'll have to keep a close eye on it from here on out. Once this meat comes out of it's plateau I'm hoping it won't take long to climb to 190-195 degrees. 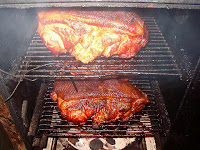 That last sentence on the previous update was famous last words. Not only did it take much longer then expected, the last piece, the biggest, didn't come off of the smoker until 7 am. Total cook time was 18 hours on it. As far as I am concerned, that break the cardinal rule of smoking large amounts of meat. They tell you to just take the largest piece's weight and multiply by 1.5 hours to get an estimate for total cook time of entire smoker contents.

If that calculation was dead on, the total cook time at 230-250 degrees should have been around 12 hours. The actual cook time was 18 hours at 230 degrees. I monitored this smoke extremely close, never letting smoker temp drop below 210. So I would suggest that when doing a smoker full of meat, where air flow might not be as unrestricted, take the weight of the biggest piece and multiply by 2.25 hours. 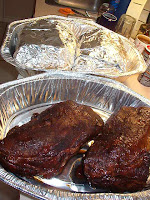 The fire can only put out so much energy. The meat absorbs it as it cooks. We had 4 pieces of shoulder all competing for that energy. The water bowl was filled with sand and covered with foil. Wood used was hickory and mesquite.

I hand pulled the two smallest pieces and ended up with a roaster pan full of hand pulled pork. I then bathed it in a cup of my finishing sauce, which is made with apple cider vinegar, ketchup, tomato paste, onion powder, garlic powder, cummin, cayenne, sugar and crushed red pepper. 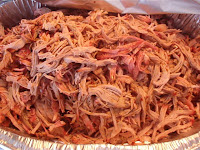 I still have the two largest pieces to process, but first I'm going to take a nap. Smoking and hand processing 30 lbs of pork is not an easy task. I had to babysit the last piece every 1.5 hours by alarm clock, so I never got a good nights rest.

Until Next time - Keep on Smokin!

yeap, 18 hours sounds right (maybe more with the temp drop). But great fun to tell everyone how much we suffer to feed them